How Gwinnett’s Hangar Came To Be 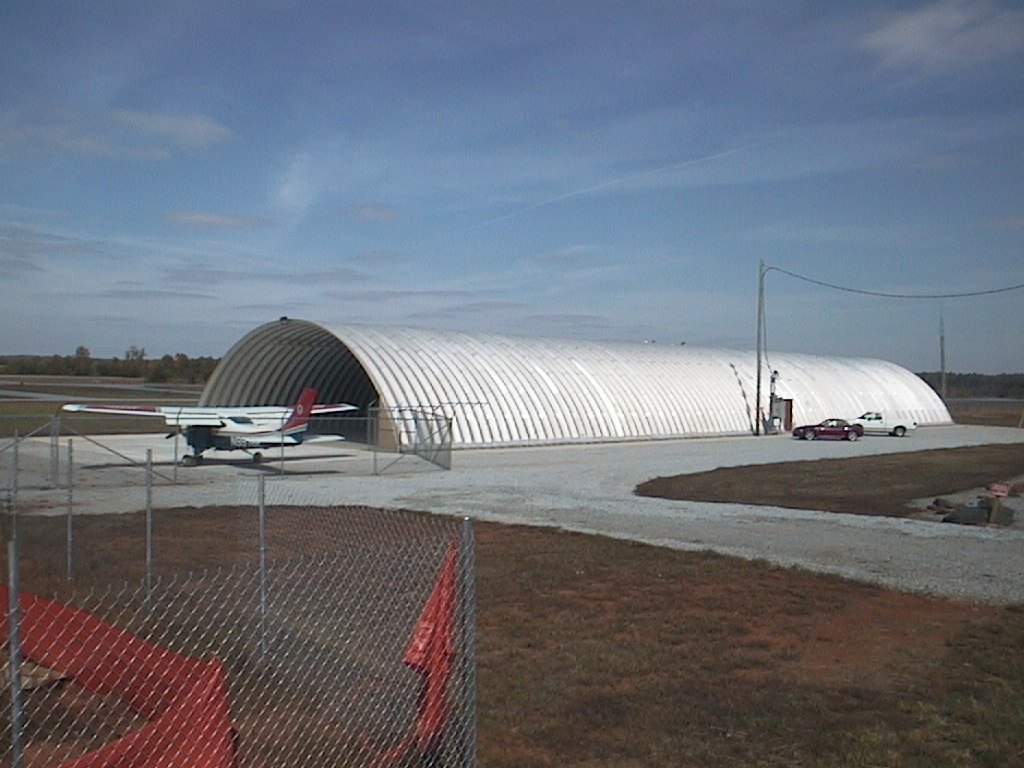 Briscoe Field, GA—In 1996, a CAP squadron commander was faced with an overwhelming dilemma: the meeting space for his unit, which was provided by the airport authority, was about to be “no more”.  Soon, the building was to be demolished and the squadron would have to fend for itself.

This was especially irksome, as it would be for any CAP squadron commander.  Will Hargrove dwelled on the problem and felt despair.  The squadron was really beginning to “bud”, and the challenge seemed to dictate an end to his up and coming unit.

Ten years previously, the squadron had been meeting in the unused corner of a “T” hangar.  Most airmen know that every “T” hangar has a corner, snuggled on each end, which is commercially useless.  Gwinnett Squadron was born there—a hot, dusty, place during the summer and a dank, drafty place in the winter.  The members suffered in quiet dignity, but they stayed.  After all, they were Civil Air Patrol and needed to be around airplanes.  The cool basement of a church just didn’t make up for it.  Besides, the rent was cheap.  Zero, for that matter.

Half a decade later, Will Hargrove became the commander.  His predecessor had managed to wrangle a more comfortable billet for the unit in the airport authority’s unused office space.  That represented the height of luxury: air conditioning, running water, even bathrooms.  Under Will’s guidance, the unit really started to bloom.  Accolades started to drift down from wing headquarters.  The members grew proud and several sweet years floated by.

But the end of that gravy train was now at hand, so that’s when commander Hargrove confided in his deputy commander, Johnny Badger.  Badger, a young bright-eyed and bushy-tailed lieutenant, simply said, “let’s build our OWN hangar!”

The astonishingly simple statement washed over commander Hargrove.  He thought about it, dismissed the infinite magnitude of the matter, and said, “Why not?”  For most people, it doesn’t take much to know when you’re licked.  Instead, Will came to the heroes’ conclusion: what have we got to lose?

It should be known, however, that people of lesser vision and greater experience would have balked.  Lt Col Hargrove was not predisposed to side with either.  As a weapons systems officer on an F-4 “Phantom” in Vietnam, he learned to appreciate life.  He rose to his duties, as proven by 275 missions in combat.  After retiring from the Air Force, he volunteered for the Civil Air Patrol.  There he met with the same spirit as he grew up with in the war, albeit, without the day-to-day worry of earning posthumous medals.

And, he let his deputy’s naïve statement take hold.

At first, as with any project, came the funding problems.  Lt Col Hargrove enlisted his senior members and went to work.  They formed a team effused with his vision and rolled up their sleeves.  Over one hundred letters were sent to everyone they could imagine.  They spoke, via typed words, and attempted to beguile the hearts of corporations, public-interest groups, and institutions.  Then they waited.  Finally, an east-coast institute bequeathed ten thousand dollars.  This was no small sum on the donor’s part, and Hargrove’s team did not treat it as such—even though, in the world, ten grand doesn’t amount to much.  Had the commander known how much the end price would be, the offering would have seemed slim pickings.

Lt Col Hargrove’s spirit soared.  No sooner than he had received the institute’s check, he also discovered a hangar on sale—for a mere $19,000.  With $10,000 in the bank, Will allowed himself some hope.  In fact, he thought, “this is going to be a piece of cake!”

The search for funding continued.  Companies large and small gave, but not all of them.  As in most fundraising efforts, the majority didn’t even respond.  The key is to saturate the market and let statistics be your friend.  A two or three percent response rate is good.  To keep things rolling, the cadets got into the spirit and raised almost four thousand dollars all by themselves.

The funds kept growing, and Will was able to purchase the hangar.  But there was no place to put it.  Adding to the problem was how to transport the hangar’s ten tons of sheet metal to the site.

Will called some military friends and they fetched it one sunny Georgia weekend on a flatbed truck.  I asked if his buddies were National Guard or Reserve.  Will told me it didn’t really matter.  They would rather not to do it again and have begged to remain anonymous.  You can stress out even the most dedicated philanthropists.  The secret is to neglect telling them how hard something is going to be, and Will did just that.

The pieces of the hangar languished in storage for a while, but even that had to come to an end.  For a year, Will’s vision lay beneath tarps on a stretch of airport ground that he managed to lease from the airport.

That, too, is worthy of note.  The commander had, through a miracle of master salesmanship, convinced the airport authority to lease him three acres of airport land for a mere one dollar per year—on a twenty-five year lease.  He deprecates the effort, but its actual value would possibly ring true to every airman: CAP does search and rescue!  It is not a conflict of interest for an airport to grant us some space.  After all, we rescue their clientele.  I wonder how many downed pilots were giggling happy at the site of a CAP airplane when they themselves forgot to top off their tanks?  But I stray from the point.

Now we get to the part of the construction.  There exists no gage that could add up the calories spent by the members of Gwinnett County Composite Squadron.  A few facts are in order, though.  There were over 22,000 bolts—each was tightened “hand tight” at first, then had to be tightened again with ratchet and wrench once the “roof” was up.  There were ninety-seven separate arches each weighing over two hundred pounds.  Each arch was separately, and lovingly, put into place.  Once finished, the structure was 200 feet long, 55 five feet wide and 18 feet tall.  Eleven thousand square feet!  Total cost (a hangar door has yet to be added): $60,000.

The members paid in other ways, too: countless cuts and bruises along with one heck of a lot of aching muscles and perspiration.  To name everyone, who gave their weekends, their afternoons, and their money, would take nearly a full page of a small newspaper.  Let it suffice to say that 95 percent of us are still here.

We stood behind Will, and stand behind him still.  Besides, we weren’t about to let anyone enjoy the fruits of our labor without us enjoying it, too.

In Gwinnett lore, some, namely those who were there at the point of inspiration, will remember Johnny Badger.  And we thank him for his wild idea.  But we know, most importantly, that it took one man, Will Hargrove, with a gazillion hours on the logbook, to know how to take it through preflight, through the fog, through takeoff, through thunderstorms and tornadoes, and THEN, find the strip for a three point landing.

We don’t call it the Lt Col Wilbur H. Hargrove Buiding for nothing. 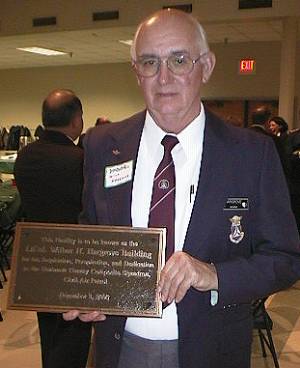 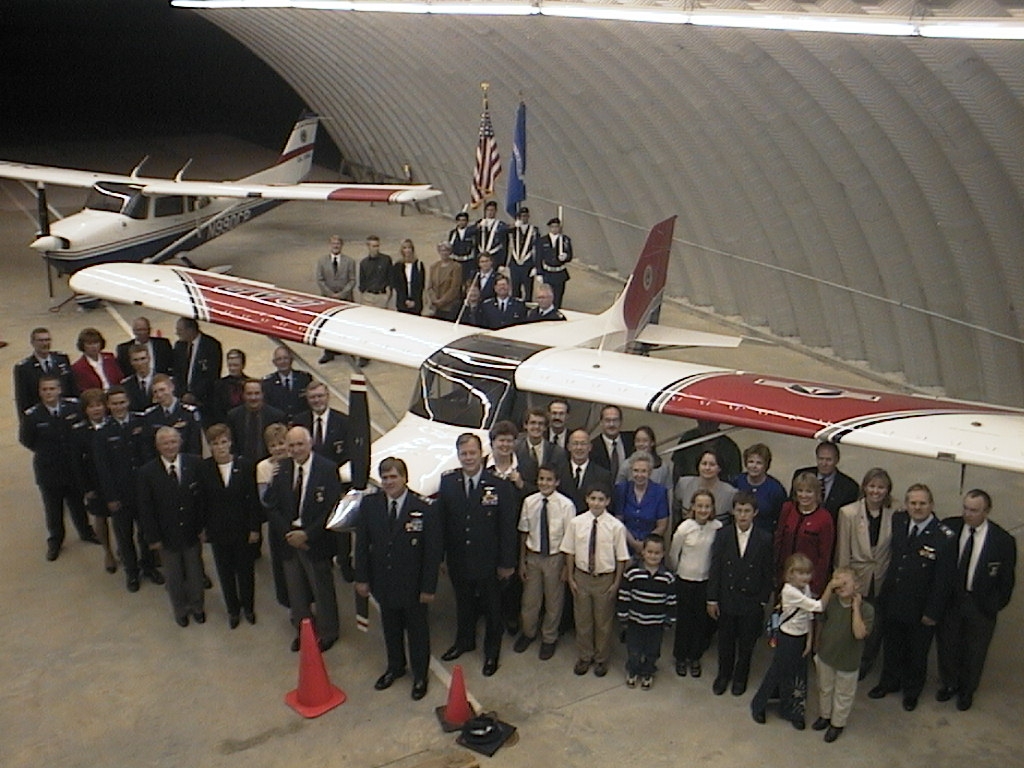